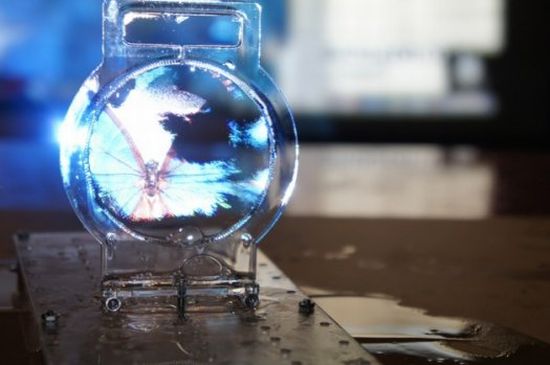 We’ve seen researchers trying to develop unusual displays like a computer screen using water or a touchscreen out of ice. However, employing another method this time, an international team of researchers has created a display out of soap film. Claimed to be the world’s thinnest transparent screen, the opaque display utilizes ultrasonic sound waves to form a 3D or a flat image. The ultrathin, flexible BRDF [bidirectional reflectance distribution function] screen is made out of a mixture of two colloidal liquids.

Dr Ochiai and his colleague Keisuke Toyoshima from the University of Tsukuba and Alexis Oyama from the Carnegie Mellon University developed the display. As the team could ably hit bubble’s membrane with ultrasonic sound wave, it enabled the screen to flaunt variable transparency and reflectance. Scientists further modified wave’s frequency to alter the transparency of projected image. While usual screens don’t respond to varying images, the transparent screen shows different textures by changing the reflection in real time. Hence, by combining ultrasonic waves with ultra thin membrane, the team successfully produced lifelike imageries on the soap bubble.