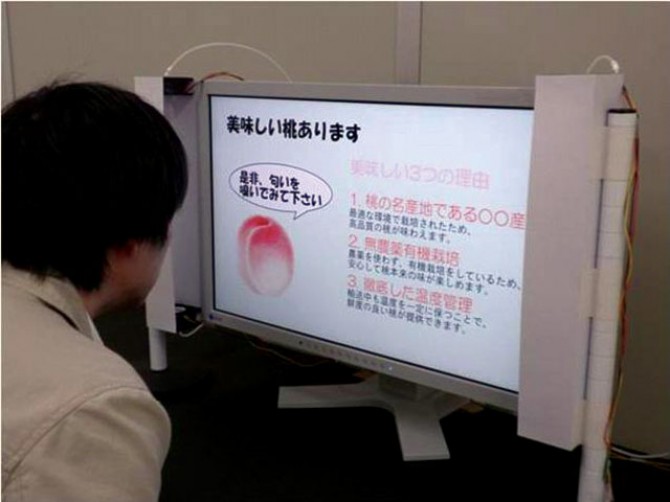 You might think so, but It’s not an April Fool joke. A team from Tokyo University of Agriculture and Technology in Japan has developed a “smelling screen” that lets you smell  the TV programs you are watching. The Smell-o-vision TV produces smells from the spot on the display where a corresponding object is shown. The Smell-o-vision TV comes equipped with fans on all its corners and there is the mixture of chemicals that generates an accurate smell of the food item that’s being shown on the screen.

The fans blow the scents at different, controlled rates to make you believe that the smell is coming from the object on screen itself. Imagine how cool and fun it would be to watch those coffee, burger and fried chicken adverts on your TV with this smelling screen. You could actually smell them while watching TV in the comforts of your sofa.

This is not the first time that we are hearing about the “smell-o-vision” technology. A 1960’s film titled Scent Of Mystery was the first to make use of this technology. The whole idea was to disperse scents to the audience during specific moments in the film. However, the scent mechanism did not work properly and the movie turned out to be a bog failure. There was a delay between the scenes and their corresponding smells, and there was a loud noise when the scents were released.

But now, this Japanese team has managed to integrate the smell-o-vision technology into televisions quite successfully. However, the prototype smelling screen releases only one scent. The team intends to develop a cartridge-like system that will help implement multiple smells at a single time. As of now, the users can move their heads to various locations on the TV screen and can experience the different smells from the different objects at different locations on the screen. Haruka Matsukura cited that the smelling screen can find good use as a way to enhance advertising hoardings and museum exhibits.

Technological Revolution and More after 2013

InstaMedia.com – A Dr Prem Web Magazine Network Site. With 50+ web magazines and 5 million monthly readership, we invite you for Promotion, Review, Ranking and Marketing of your Content, Products and Services. Also connect with us for sale and purchase of websites. Contact Us Now.