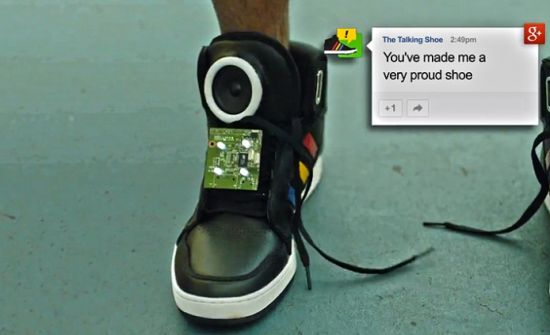 Google has been widely known for its experimentation in technology, but this time around the tech giant has come up with an advertising project that combines fashion with technology, which could well be the gateway for intelligent clothing to assist secret agents. Developed as a part of the Google’s latest arts project, “Art, Copy, Code,” the “Talking Shoe” is essentially an Adidas basketball sneaker that interprets the data of physical movement through humorous messages to wearers as well as their companions.

Featuring an accelerometer, gyroscope and Bluetooth connectivity, the Talking Shoe forwards the data of position and movements of the user wirelessly to the Internet, which is further communicated to an app that describes the information, such as what to do and what to avoid, and responds to the user with amusing remarks.

In case, the user remains standstill for a longer period, the shoe becomes a virtual coach to prompt the activity to wearers, or admire them after they deliver a meticulous performance. Offering an Internet-connected assistance, the Talking Shoe as projected by the Google is “a smart sneaker with personality that can broadcast its story to the web.”