Gone are the days when computers used to comprise of standalone monitors, CPUs, keyboards, speakers and UPSs etc. Case Modding aka modification of the computer’s basic framework is all the rage these days with individuals trying out different ways to design case mods for their systems. And though the list of interesting case mods is really long (literally), we have come up with five of the most intriguing, unique and extremely creative case mods we have ever come across.

Although a bit unsightly at first, thanks mainly to the dark brown pain literally splashed across it, the Training Toilet Case Mod scores brownie points for its creative design. Designed by EnVaDor, the mod comprises of a standard children’s training toilet (bought from a supermarket) which has been spray painted for extra effect.

The flush of the toilet actually acts as the start button (don’t know if we would get to hear the customary ‘flushing’ sound when we press it though). The designers have also sprayed a bio hazard logo at the lid to complete the picture. All put together, the Training Toilet Case Mod comes across as a brilliant an imaginative design, although you probably would not want to keep it at your desk in the workplace. 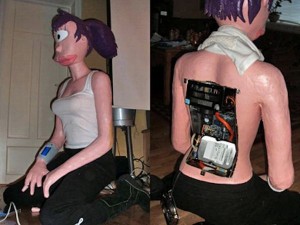 Remember that ghastly monster that appeared in the movie ‘Time Machine’? Well, someone was so impressed by it that he went ahead and designed an animatronic head case mod that looks exactly like the beast in the movie. The head has been programmed to work when attached to the main PC. And though its exact working mechanism remains unknown, the designer has surely infused some terror in its framework. Be sure you switch it off before hitting the bed at night lest you want to wake up in between to see a pair of frightening red eyes staring at you!

The person who designed this particular case mod seems to really like the Hulk. For what else can describe this awe-inspiring case mod design that features the cartoon character as its center piece? The figure measures 33cm and carries the motherboard on its head.

The designer of the case mod, Chris Blarsky also created the figurine with the purpose of cleverly concealing most of the system wires (which run through the Hulk’s body). It took Chris over 14 months to conceptualize and design the Hulk Mod Case, with the end results being extremely impressive. 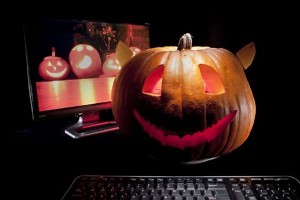 Designed by Intel, the Cyber Pumpkin Case Mod is an impressive framework design that comprises of all the main parts of the computer placed inside a large pumpkin. Intel designed the pumpkin as a prototype for their Pentium 4 processors in 2002. However, we can’t help but wonder whether it would make quite a nice addition to our list of creepy Halloween gadgets as well!

What’s WMD you ask? Well, it stands for Weapon of Mass Destruction. And the case mod behind this unique name is shaped just like a real life atom bomb. Impressive, creative and a tad bit frightening (it would create quite a scare in public places for sure), the WMD Case Mod is not complete as of yet, but would surely create a stir once it is finished and available in the market.