Whenever we see a science-fi movie, we tend to wonder whether the gadgets we see would ever be made in real life. Not many of us know though, that some of these sci-fi gadgets already exist today. Given below are 5 existent sci-fi technologies that would really blow your mind away. 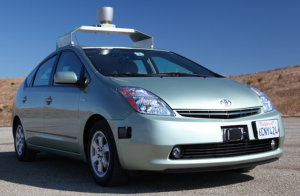 The sci-fi films I, Robot and Minority Report had many things in common, mainly the driverless cars which when set in autopilot, can move in and out of traffic seamlessly. Well, google had decided to take the concept of the driverless car seriously, and managed to create The Google Driverless Car which is capable of driving for several miles without manual intervention or control. The car is still in its testing phase and Google has deployed at least 12 prototypes to be on the roads at all times.

Androids and bionic robots have been featured in several sci-fi films dating back many years. And the actual idea of creating an android robot that can walk, talk and think like humans still seems a vision designated for the future.

Not so for DARPA though, which has created a Pet-Proto robot that can walk on its own without any support, and actually take decisions on its own when it comes to overcoming obstacles in the path. The robot is capable of walking over obstacles with ease, and even has reflexes to correct itself should it lose balance while walking. DARPA is planning to add more features to the robot so that it can be used to handle human vehicles and tools, and even enter areas too dangerous for humans.

Is it really possible to remain immortal? Russian Dmitry Itskoy thinks it is. In about 10 years’ time, Itskoy claims to create a process that could make a person immortal by transplanting his brain into a fully functional robot. Itskoy claims to be working on a process that would transform the consciousness of an individual into a program that can be uploaded onto the mechanical brain of a robot. Itskoy sees the possibility of full scale transplants of human brains into humanoid robots by the year 2020.

Frightening and yet exciting in a way, face scanners are becoming increasingly popular these days, what with places like police stations using instant pictures and scans to find out every single detail about a specific individual. Developed by FaceFirst, these face scanners use camera feeds to narrow down on a person, and takes an instant photo which is transmitted back to the headquarters. A scan program then runs matches against the photo, takes out all the information related to it, attaches the real time video clip of the person as well, and sends all these pieces of information to the person who asked for them.