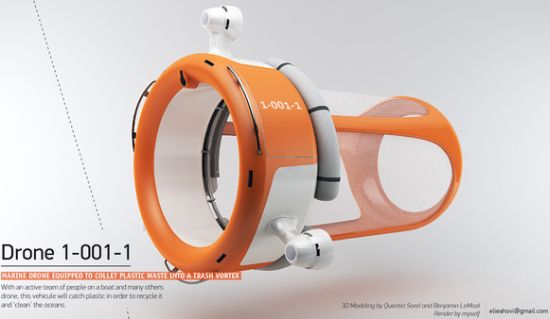 As rightly pointed out by folks at TG Daily, public, even the governments across the world don’t take the issue of drones patrolling their airspace lightly. However, if we use same drones for helping us in carrying out our daily chores, it shouldn’t raise a single eyebrow for sure. The Marine Drone is one such concept that would operate underwater and destroy ocean garbage, thus decontaminating seawater of its poisonous impurities. The self-sufficient robot is the brainchild of Elie Ahovi and his team of collaborators at the French International School of Design.

The Marine Drone includes a maw-like catcher that keeps engulfing plastic bottles and garbage. A sonic emitter sends out irritating signals to ensure that aquatic life doesn’t have to suffer the least impact. The Drone relies on waterproof batteries and electric motor for performing its silent underwater operations. Once it has collected enough garbage, the Drone docks itself with a nearby mothership. Here the crew would crane up the garbage for collection and further dispose it off.