There was a time when you watched science fiction movies and wondered would you be able to control 3D objects the way they did in Matrix? You must have thought that such user interfaces would never really exist in reality, but movies inspired scientists and engineers to create user interfaces that are now increasingly used in common workplaces.

Let’s check out some of the interfaces that we first saw in Hollywood, which are now a reality or not far away from being one.

Remember Tom Cruise, the futuristic police officer, who could foresee events on a glass display? Well, this is now a reality. Although, it might have seemed farfetched in 2002, but in 2013, you can find such screen technology in Xbox Kinect and Microsoft’s Surface.

While the superheroes fought the world in 2012 movie – The Avengers, backstage a number of technologies were used, including glass screen inputs that can be used as touch screen. Although, this might not appear to be true, but Microsoft and other software giants are trying to turn this into a reality, with success achieved in initial stages.

In Quantum of Solace, Bond proved his supremacy by using a variety of gadgets, which till now seemed to be too futuristic. But thanks to movies, scientists inspired themselves to create a technology through which a table right in your dining room can be turned into a touch screen computer. The design is similar to Microsoft PixelSense, but needs more reinventing.

Prometheus may not have received rave reviews from the critics, but the movie did showcase a range of cool designs that can be used by the technological innovators. With beautiful spaceships and alien architecture, it inspired engineers to create an outer world that has far more technologies with futuristic interface, which can make communication more awesome!

Avatar, the USD 2 billion grossing movie not just used technologies to create a plot that was quite mesmerizing, but also used user interfaces that can soon be a reality. The touch screen and the gesture user interface anywhere in the room are reputable. And though the idea of using touch screen and convert random matter into a computer is still in its infancy, it is definitely not beyond the reach. 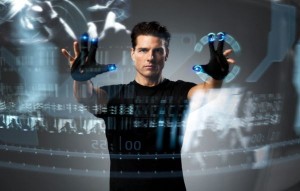 Mission Impossible 4’s cool touch screens aren’t far away from becoming a reality. Using your fingers to create maps or search a place will not be a dream anymore. With engineers crafting technologies that can transform a touch screen to a wall, mission isn’t impossible!

Total Recall of 2012 featured new and exciting possibilities for touch screen and user interfaces, with the most indelible being computerized faces that can be changed.