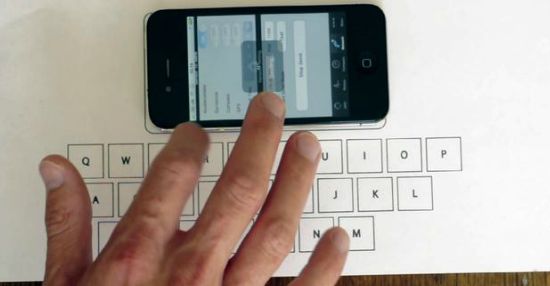 Typing long text messages or emails on a small onscreen keyboard of a Smartphone often becomes frustrating for the users on the go. Offering a solution, designer Florian Kraeutli, a student at University of London’s Godsmiths College, has designed a virtual keyboard that lets the user draft a mail virtually on any flat surface. Dubbed “Vibrative,” the virtual keyboard makes use of built-in accelerometer of the iPhone to measure vibrations, produced by finger tapping on the surface it’s placed on, and type text like a standard keyboard.

The virtual keyboard has been created by customizing an iPhone, which recognizes the distance or placement of keys with the force of tap on the surface to determine the letter that is being displayed on the screen. Though the Vibrative seems to be a smart innovation for the Smartphone users but the accuracy of letters, which currently is about 80 percent, need little more improvement before mass production.

Vibrative turns any flat surface into a keyboard to type on your iPhone was last modified: November 15th, 2012 by DrPrem Jagyasi
Florian KraeutliiPhone KeyboardKeyboardVibrativeVirtual Keyboard

3D printed prosthetics that are changing our...