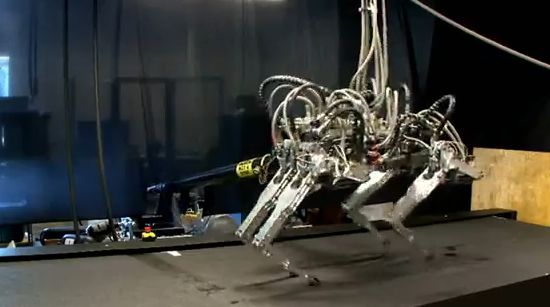 Robotic Cheetah can beat Usain Bolt on a treadmill

People often compare the fastest man on the earth, Usain Bolt, with the fastest animal, Cheetah, and wish to watch them running alongside in their fantasies. Giving wings to your wild imaginations, Boston Dynamics has developed a legged robot called the “Cheetah” that can reach the top speed of 28.3 mph, which is around 0.5 mph quicker in comparison to Bolt’s best 20 meter split, to become the fastest legged robot ever.

Funded by DARPA’s Maximum Mobility and Manipulation program, the legged robot features an articulated spine that bends backward and forward with each stride and brings it in momentum like an animal. Though, the current version of the four-footed robot is designed to sprint only on a treadmill but researchers at Boston Dynamics are planning to test the outdoor version of the robotic cheetah in early 2013. Powered by an off-board hydraulic pump, the Cheetah Robot takes the support of a boom-like device to balance it on the treadmill at high speeds.