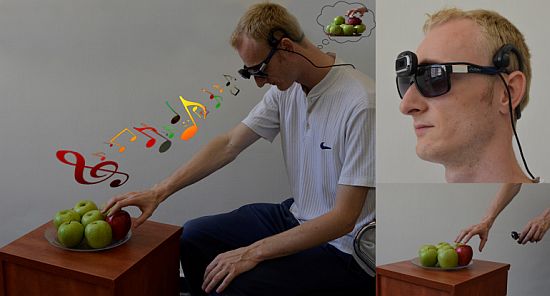 For blind people, nothing could be more soothing than to have a device or technology that could help them perceive the physical world through sounds only. EyeMusic is one such device that conveys visual information by assigning musical scales to them. The wearable device, created by folks at the Hebrew University of Jerusalem, may help blind people play video games or picking right stuff at supermarket in not-so-distant future.

The device has a video camera – attached to a pair of glasses – that scans visual information (moving left to right) and translates it into soundscapes. Next, a pair of headphones transmits these soundscapes or music pieces into user’s scalp. The intensity of soundscapes is directly proportional to number of pixels in visual content. So, higher pixels translate into a higher soundscape. Moreover, different colors mean different instruments for making it easier for users to differentiate between visually similar images. For example, a trumpet sound stands for blue, reggae organ for red, reed for green, violin for yellow, vocals for white and silence for black.

As researchers tested their device, they were simply enthralled to know that blind-folded subjects could learn to use EyeMusic in less than half an hour. Now, that’s commendable for sure, what do you say?